The Unfolding Mystery: Discovering Christ in the Old Testament

The author studies characters and passages from the Old Testament and explains to the reader how Christ is revealed through the passage, the character's life, or similar means. This book lends itself well to personal or group Bible studies because of the discussion and application questions accompanying each chapter. If my pastor were not so wonderful at explaining many of the concepts covered in this book, I'm certain I would have gotten much more out of it than I did. There are many other places in the Tanakh that Christ can be discovered. This book is not intended for an academic audience, but more for a lay audience that it is interesting in deepening its knowledge of what the Bible, and specifically the Old Testament books, teach about Christ. The book is also not comprehensive. This review is based on an advance e-galley provided by the publisher through NetGalley.

Fancy a Cuppa By the Cathedral? 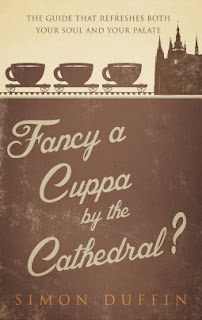 This is a book for tourists to England who want their cup of coffee or tea after visiting the local cathedral. Each entry tells a little about the cathedral, although it does not go into great detail. Sometimes a bit of information about the city is included before giving information on the cathedral itself. If the city or cathedral has been featured on TV (such as Dr. Who) or on film (such as Harry Potter) that information has been included. After the cathedral information, the author first talks about the coffee shop(s) and then the tea room(s). The entries typically tell a little about where the coffee is acquired, how many varieties of tea are offered, types of cakes or baked goods offered, and maybe a bit more. I've always heard that one had difficulty locating a decent cup of coffee in England, but this book makes it seem as though a good cup of tea is more difficult to find. It seemed there were a lot of places where one or more coffee shops were listed and the author had no tea rooms to recommend or where the tea room had recently closed. I only recall one instance of a coffee shop having recently closed in the narrative.  There were several tea rooms which only offered tea of the bagged variety. The writing was very informal and did not follow the practices of good grammar. It's a fun take on a travel book, but the shear number of places that had recently closed illustrates how quickly the guide becomes dated, making it a non-essential purchase for most. I received an e-galley through NetGalley from the publisher with the expectation that a review would be written.
Posted by Lori Thornton at 6:28 PM No comments: