The Chronicle's Wired Blog has a very interesting item today to which a lot of people in academic circles can relate.
Posted by Lori Thornton at 2:26 PM No comments:

Email ThisBlogThis!Share to TwitterShare to FacebookShare to Pinterest
Labels: Christianity

I love lorikeets. They are such colorful birds (besides having a good name)! Bill Hobbs has some great pictures of the ones in the Nashville zoo.
Posted by Lori Thornton at 8:54 PM No comments:

Email ThisBlogThis!Share to TwitterShare to FacebookShare to Pinterest
Labels: birds

AnceStories tells us about an online ScanFest that will take place on Sunday March 25 for those with scanners and Windows Live Messenger. It sounds like it will add some fun to those participating. Unfortunately I have a previous commitment and won't be able to join in the festivities.
Posted by Lori Thornton at 9:16 AM No comments:

Email ThisBlogThis!Share to TwitterShare to FacebookShare to Pinterest
Labels: photos

Cow Hampshire offers some observations on our changing language in her post about cellars becoming basement. I think we've all noticed similar changes with other terms.
Posted by Lori Thornton at 9:13 AM No comments:

Email ThisBlogThis!Share to TwitterShare to FacebookShare to Pinterest
Labels: language

The 20th carnival of genealogy is posted at Creative Gene.
Posted by Lori Thornton at 10:12 PM No comments:

Email ThisBlogThis!Share to TwitterShare to FacebookShare to Pinterest
Labels: Carnival 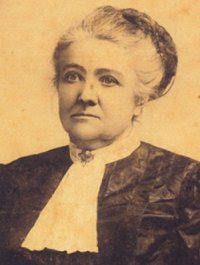 Laura Lucy (Taylor) Lantz was my great grandmother. She was the daughter of Stephen and Betsey (Dearborn) Taylor. She was born 25 April 1854 in McLean County, Illinois. Her father Stephen Taylor was born in the Marietta, Ohio area 28 February 1814 to Stephen and Lovica (Rathbone) Taylor. His father died a few months later, allegedly in the Detroit, Michigan area during the War of 1812 although no record of his service or death has been located. He supposedly had a fascination with riverboats and claims to have known Robert Fulton. Although a minimal search has been done, nothing to corroborate this has been found. Her mother Betsey was born 4 September 1818 in Morgan County, Ohio to Deacon Nathan and Lucy (Perkins) Dearborn. Nathan’s line goes back to Godfrey Dearborn of New Hampshire. Lucy’s line goes back to John Perkins who immigrated to Massachusetts in 1629. Although Laura’s father was not very religious according to his obituary, Laura attended the Methodist church which was very near their home in the portion of McLean County near the Woodford County line. She married Abraham Lowden “Abe” Lantz on 15 February 1874. Abe grew up in an Amish family which had moved to McLean County about 1851. His parents and many of his siblings moved to Howard County, Indiana by 1864, but Abe remained in Illinois where he went to work for a merchant. Eventually Abe owned his own dry goods store in White Oak Township and later in Carlock. He also served as postmaster for some time. After Abe and Laura married, they attended the Christian Church although he never joined. In 1896, a group of Amish from the McLean County, Illinois area moved to Monroe County, Mississippi. Abe, Laura, and their seven living children moved along with this group although they attended the Christian Church. Known children are: Levi Hollis “Lee” (1875-1955), Saloma Olive “Ollie” (1877-1923), Emma (1881-1965), Abraham Lowden “Abe” (1883-1918), Irving Lee “Moses” (1885-1971), Mary Irene “Marie” (1888-1971), and Betsy Barbara “Bess” (1891-1977). (The 1910 census states that she was the mother of 8 children, 7 living. The birth order and sex of the eighth child is not known although it seems likely this child was born between Ollie and Emma.) At least two of Abe’s children served as teachers for the Amish. Laura is said to have been a good cook. She served seven courses with every meal at her husband’s insistence. In 1918, son Abe, a salesman for the Brown Shoe Company, died of yellow fever in Texarkana, Arkansas. Due to the quarantine conditions at that time, his body was buried in Arkansas. His widow eventually moved to Denver, Colorado. Her beloved husband Abe died in 1920. Laura died of cancer 25 September 1922. She and Abe are buried at the Odd Fellows Rest Cemetery in Aberdeen, Mississippi. Her daughter Ollie died in a tragic car-train accident in South Dakota the following year as she was going to Yellowstone National Park with her family for a vacation.
Sources:
Duis, E. The good old times in McLean County, Illinois : containing two hundred and sixty-one sketches of old settlers, a complete historical sketch of the Black Hawk War and descriptions of all matters of interest relating to McLean County. Bloomington, Ill. : Leader Pub. and Print. House, 1874.
Luthy, David. The Amish in America: Settlements that Failed, 1840-1960. Aylmer, Ont.: Pathway Publishers, 1986.
Marriage License, Abraham Lantz and Laura L. Taylor. McLean Co., Illinois, Marriage Book G, p. 249; photocopy in my possession.
Stearns, Ezra S. Plymouth New Hampshire Families. Baltimore, Md.: Clearfield Company, 2001. Orig. pub. as vol. 2 of The History of Plymouth, New Hampshire (Cambridge, Mass., 1906).
Also various federal census records; deeds; newspaper clippings; family sources.
Much of the information about Abe's store and duties as postmaster can also be found in McLean County histories and directories which are available at the McLean County Museum of History.
Posted by Lori Thornton at 8:50 PM 1 comment:

Many of the bricks from the McClung Warehouses fire in Knoxville will find a new home at the Museum of Appalachia.
Posted by Lori Thornton at 6:12 PM No comments:

The 19th Carnival of Genealogy is up. I didn't participate as I couldn't come up with a good story.
Posted by Lori Thornton at 5:13 PM No comments:

Email ThisBlogThis!Share to TwitterShare to FacebookShare to Pinterest
Labels: genealogy

I'll admit it. This is a trick question because the vote isn't over yet. However, the Cherokee nation is voting today on whether or not to "kick out" members of the Cherokee nation who descend from black slaves of the nation. Many of these already have documents stating that they are descended from full-blooded Cherokee.
Posted by Lori Thornton at 4:12 PM No comments: