Harris Henderson owns and operates the Birds of Prey Rehabilitation Center in Awendaw, South Carolina. His wife abandoned him and his daughter, but now he finds that he is unable to manage his daughter's juvenile diabetes without help. He advertises for a nanny who preferably has some medical knowledge. Ella Majors responds to the ad. She had been a pediatric nurse in Vermont before she had seen one child too many die. Ella develops a love for the child, the birds, and even for the father. The rehab extends not only to the birds but also to some of those working there. This book has lots of well-developed characters. I love the gullah man "Lijah" who brings in an injured eagle and stays around to help until the eagle is able to thrive on its own. I also love the change brought in some of the characters. The birds are the focus of the story. There are parallels between their rehabilitation and what is taking place in the lives of some of the characters. The story's pace is slow at times, but never so much that I wanted to give it up. The story also creates an awareness for juvenile diabetes. This is based on an e-galley provided by the publisher through NetGalley with the expectation that a review would be written.
Posted by Lori Thornton at 10:53 PM No comments:

Pearl of China by Anchee Min

Author Anchee Min has fictionalized author Pearl Buck's life. She tells it through the life of Willow, who is a composite of several persons Pearl knew in China over the years. I enjoyed the story, but I knew that it differed from accounts of Pearl's life that I had read years ago. Pearl was the daughter of a Presbyterian missionary. In the story, Willow is the daughter of one of Pearl's father's first converts who eventually becomes a leader in the church although his initial motive for joining was purely selfish. The book covers a wide range of time, including the period after Pearl left China during the Revolution and never returned. The biggest problem with the book is the liberties that the author took with the story. That is always a danger when fictionalizing the life of a real person. Perhaps the author would have been wise to stick with the facts and make that narrative readable rather than creating a composite individual who would have know Pearl throughout her time in China. This book was received as a complimentary copy through GoodRead's First Reads Program with encouragement to write a review.
Posted by Lori Thornton at 9:16 PM No comments:

The Snowman by Jo Nesbo 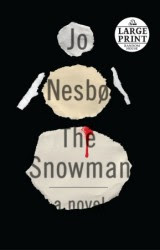 Norway has its first serial killer who leaves behind a snowman as his signature. Harry Hole is the only detective with experience tracking serial killers. He sets out to find the person responsible for the deaths in what appears at first to be a missing persons case. It's a mystery filled with suspense -- much of it a little too nightmarish for my personal taste. Although I understand why the author used it, I don't enjoy reading things that involve sex crimes. While this one doesn't go all that far in that direction, it did so to an extent beyond my comfort level. It's a well-plotted mystery, full of action that builds the suspense. There are some formatting issues with the Kindle version that make it a little awkward to read in places. It's not on every page but there are awkward line breaks and breaks in the middle of words. This review is based on an advance reader's e-galley provided by the publisher through NetGalley, and it is hoped that the formatting issues will be resolved in the final version. 3.5 stars.

I expected to like this book much more than I did. The author is an Episcopalian priest. He identifies himself as a member of the Millennial generation, and unfortunately the writing is so geared toward the Millennial generation or to those younger that it was difficult to follow his thoughts. Even though I am quite familiar with Facebook, Twitter, and other forms of social media, I could not identify with metaphors he used from World of Warcraft and other computer games as I had never played them. The copy that I read was an advance Kindle-version e-galley provided through NetGalley. There were serious problems with the formatting that marred my reading enjoyment. It appears that they used OCR to convert the book. Drop caps were letters that were a line above the second letter of the word in opening chapters. Footnotes appeared exactly following the word where they appeared at the bottom of the page. This means that every time I got to footnotes that I had to skip one or more of them and locate the line where the rest of the sentence continued. Sometimes it was difficult to tell that you were beginning the text of the footnote or to identify where a footnote ended and the top of the next page began. I sincerely hope that the publisher will convert the text to utilize endnotes (either at the end of the book or at the end of the chapter) in the final Kindle version. I've always been a fan of footnotes in print publications, but after reading this book, I will admit that they don't work in the MOBI format. 2 stars.
Posted by Lori Thornton at 8:00 AM No comments:

Among the Departed by Vicki Delany

When RCMP officer Adam Tocek along with his girlfriend Constable Molly Smith of the Trafalgar police locate a boy who wandered from his campsite in the nearby provincial park, they happen across some human bones. The first person that pops into Molly's mind is the father of one of her childhood friends who went missing about 15 years earlier. Can the bones be identified? Was foul play involved? If so, who committed the deed and why? It will be up to Molly's colleagues to find out. I loved the characters of Adam and Molly and of most of the people in the town. They were quite fun and pleasant. This novel, however, did have a few problems. The one that nagged at me from early in the book is an error which showed poor research on the part of the author. They were discussing the find of the bones and how identification could be made through DNA. One of the characters made the statement that mitochondrial DNA could be collected for comparison. Then they went to the son of the person to whom they believed the bones belonged to attempt to collect a sample. Mitochondrial DNA is passed along by the mother instead of the father, so the son would not have been a match had he agreed to give a sample. Instead, they should have been collecting a sample from a sibling of the person. Fortunately, the son refused to give a sample, and they ended up making identification through dental records, so I didn't have to congratulate them upon finding their mother's brother. There were a few proofreading errors that would not have been caught by spell check that were present. I'm also pretty sure that the dish one of the characters enjoyed while dining was huevos rancheros instead of huveros rancheros as the book stated. In spite of the problems, the characters make this an enjoyable read. This review is based on an Advanced Readers Copy provided by the publisher through NetGalley. The book is scheduled for release May 11, 2011. 3 stars.
Posted by Lori Thornton at 4:00 AM No comments: