Mary Handley is a female private investigator. When her brother is arrested for the murder of his girlfriend, an actress, she sets out to prove his innocence. The plot quickly weakens as the author begins dropping names of New York's upper crust, even engaging Mary to George Vanderbilt. It simply is not believable even though some of the novel is based on real events, and those characters are included, including the investigative team of Mary Handley and Superintendent Campbell. With the exception of the believability factor, the mystery itself is plotted well enough. The final few chapters leave an opening that many of the characters will make repeat appearances in future installments, once again being interviewed by Mary in her investigations. This review is based on an Advance Review Copy provided by the publisher through NetGalley for review purposes.
Posted by Lori Thornton at 1:00 AM No comments:

Frontier in Transition: A History of Southwestern Colorado 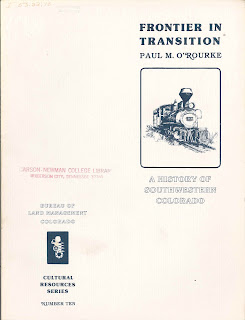 This volume is available at many Federal Depository libraries and online through the FDLP.

Posted by Lori Thornton at 9:00 AM No comments: