Agent Emma Sharpe has been called back to the convent where she was once a novice by Sister Joan to comment on a painting. Emma's family had been involved in art restoration for years and now Emma investigates art crimes for the FBI. Sister Joan goes to the tower where the painting is located, surprising a thief. When Sister Joan doesn't return as expected, Emma sets off to find her. She encounters a novice named Cecelia along the way. She finds Sister Joan dead, it becomes a matter for local law enforcement, but naturally, she gets involved. Another FBI agent, Colin Donovan is in the area. Her boss Matt Yankowski comes up from Boston. Colin's friend Father Finian Bracken also plays an important role. All the crimes seem to be related to a period shortly after Sister Linden made the convent known for its art. I found this an enjoyable read. I liked the Maine setting. I enjoyed the characters. The plot was different from a lot of mysteries. While there is a touch of romance, I wouldn't necessarily classify this as a romantic suspense because the lead female character is law enforcement official instead of a governess, secretary, or other household servant. This review is based on an electronic galley provided by the publisher through NetGalley for review.
Posted by Lori Thornton at 12:01 AM No comments:

The Legacy by Katherine Webb

After inheriting Storton Manor from their grandmother, sisters Erica and Beth Calcott go back to a place that has haunted them since the day of the disappearance of a friend years ago. In poking through some things, she finds a photo of her great grandmother Caroline with a baby -- one which surely must have been born before Caroline's known marriage.

In a parallel story covering the early part of the 20th century, we learn that Caroline, a woman from New York, married an Oklahoma rancher, and traveled west to meet him and live. We learn of the trials and tragedies of the short time she spent out west before she left the area and what prompted her to hide that part of her life from her descendants.

I really enjoyed the Oklahoma portion of the novel far more than the contemporary portion and would have liked to have seen it be the star of its own novel. The contemporary sections were not as engaging, and the manner in which they were presented sometimes made it hard to determine if it was 20 years ago or present-day since the characters involved were the same. It is also clear that there were repercussions of Caroline's past in the manner in which she treated those around her, including her own daughter. As a genealogist, I was also disappointed that Erica, as she began her search, did not try to research American records to determine if there had been a previous marriage and to see where this might have taken her. There were certainly enough clues interspersed throughout the narrative that would have led me to several sources which would likely have told more of Caroline's story for her descendants. I certainly appreciated Erica's consulting with a relative who had done some family history research, but it was clear that the author did not seem to understand genealogical problem solving.

Recommended for persons who can appreciate the historical aspects of the story without being too disappointed in the disjointed nature of the contemporary story. This review is based on an Advance Readers Copy of the book offered by the publisher through LibraryThing's Early Reviewer program. 3 stars.
Posted by Lori Thornton at 12:01 AM No comments:

What better way is there for literary friends to celebrate than to tour the home of an author? We visited the Carl Sandburg Home National Historic Site in Flat Rock, NC (south of Asheville and Hendersonville). 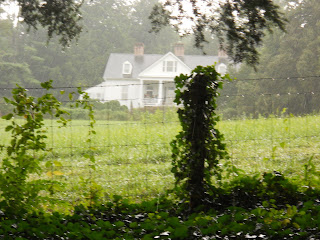 We had to climb a quite steel 3/10 of a mile trail to get to the home. It was pouring down rain. We are thankful for umbrellas. About halfway up, we got our first glimpse of the home. 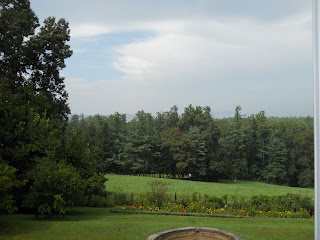 This is a view from the front porch of Connemara. 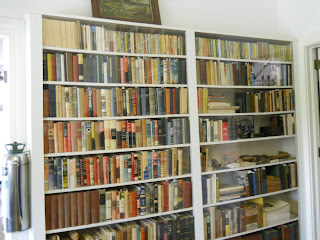 One of the many shelves of books in the house. There are over 12,000 books in the house (although 4 bookcases in one room had been removed for dusting). We learned that Carl Sandburg liked all sorts of books except for one kind -- mysteries. How sad! That's my favorite genre. We made a comment that we were certain that we had seen some in his legacy library on LibraryThing. The guide told us they belonged to his daughter. There were some in the house. 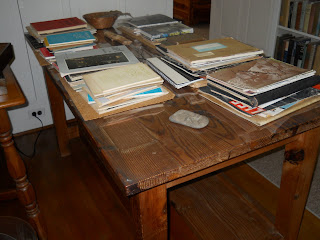 This table had rather interesting provenance. Apparently the wood came from the Lincoln White House. 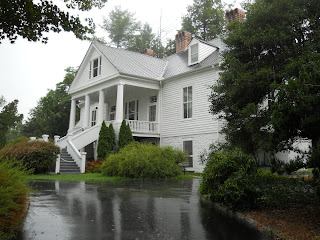 Connemara. The home was named by its previous owner, a Charleston businessman who summered in Flat Rock. He named it Connemara because it reminded him of the hills of Ireland. 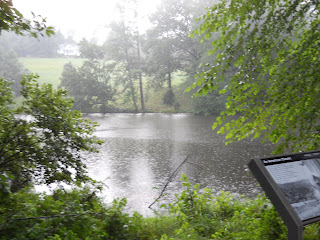 The lake. It's very near the parking area. 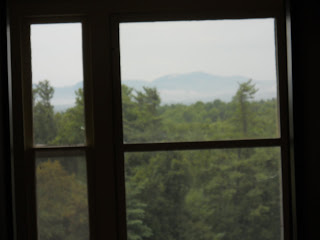 This is a splendid mountain view from one of the windows in the upper floor of Connemara.
Posted by Lori Thornton at 8:39 PM No comments: 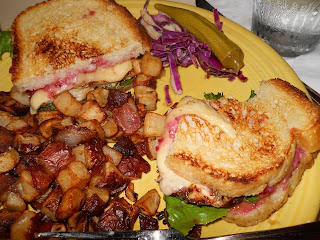 This was their wonderful Charleston Chicken Sandwich that comes with a cranberry mayonnaise on it! 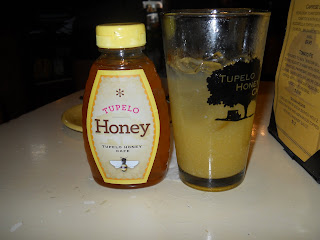 Of course, we had to take a photo of the official jar of Tupelo honey. One person in our party ordered the rosemary peach lemonade. She said it was very good. 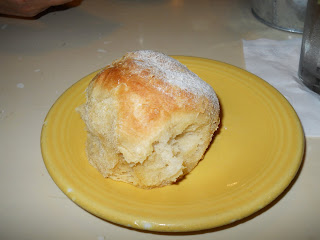 They brought biscuits to everyone (along with honey and some preserves). 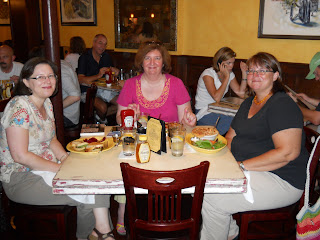