I stumbled across a rather interesting family (at least according to the online family trees which are in various states of documentation ranging from none to mediocre). I had copied various Harris and Davis marriages from the Lincoln County index in Mrs. Harry Kennett McAdams' book Kentucky Pioneer and Court Records: Abstracts of Early Wills, Deeds and Marriages from Court Houses and Records of Old Bibles, Churches, Grave Yards and Cemeteries (Baltimore: Genealogical Publishing Co., 1961). One of the marriages was for a Samuel Harris to an Elizabeth Van Cleve on 25 October 1784. (p. 112) I will admit that this Samuel Harris is in Kentucky earlier than my family appears to have been.

I decided to see if I could find anyone researching this couple in an effort to discover how these families might or might not be related to my Harris and Davis families. As I inserted the couple in a search in WorldConnect (http://wc.rootsweb.ancestry.com/), I came up with something quite interesting just from the locations mentioned for Samuel's birth and death. Samuel was said to have been born 20 Nov 1763 in Bechman Twp., Dutchess Co., N.Y. I recognized that immediately as the area where the Beekman Patent was. At least one tree stated that he was born in neighboring Nine Partners rather than Bechman Twp., but it was still in the area. There is a note in one tree that states he was a member of the Reformed Dutch Church. His death location was listed as Pleasant Hill, Mercer Co., Ky. I immediately recognized this as what we call "Shakertown." In fact, some of the trees elaborated a bit more on this connection. It appears that Samuel and his wife Elizabeth, said to have been a North Carolina native, became Shakers in 1806. Seven children were listed in one of the trees, and it was noted that all of their sons eventually left the Shakers, but that the daughters remained. Samuel and his wife Elizabeth are said to be buried in unmarked graves at Shakertown.

I found this connection between the Beekman Patent and Shakertown to be very interesting. I'd love to do further research on this family to try to prove or disprove the claims made in the online trees.
Posted by Lori Thornton at 12:34 PM No comments:

In the process of my efforts to make sure all my notes, photocopies, etc. are filed in a more easily retrievable manner, I began tackling a notebook that contained some of my earliest attempts in genealogy. This particular notebook contains information from at least three families that were connected with each other. I've not worked on one of the families in at least a dozen years (maybe even longer). As I am going through the materials, I'm trying to see what is in my database and what isn't, if it pertains directly, in an identifiable manner to my direct or collateral lines, and add it if necessary. For things that were attempts to crack the brick wall on this line, I'm going back to try to annotate some of the research so that I can see if I can make it a bit more meaningful to try to get past the brick wall, and typing it up (with footnotes) to get it in a more retrievable format. I've come across some interesting things.

I had handwritten notes on notebooks in 3 ring binders without reinforcements. I've discovered a page of notes with the bibliographic information missing on one of the items. What I do know about the source is that on pages 143-147 (at the very minimum) is a list of early marriages of Cumberland County, Kentucky. My notes indicate that the source stated that the county was formed in 1798 and included large parts of several counties, one of which was Wayne County. I also have a note that the list that follows was made by Mrs. Nora C. McGee before the courthouse fire of 1933. (I've summarized for you here, but I had the actual wording in my notes.) Then I included the marriages for two surnames that I was researching in Wayne County. Oh, how I wish I'd known then to make sure that the source information appeared on each page that I wrote by hand. I sent an e-mail to a couple of friends who do a great deal of research in Kentucky. I mentioned to them that I'd probably gotten it from the Public Library of Cincinnati & Hamilton County. I also mentioned that if they couldn't identify the source that I'd have to hope that either the McClung Collection or Tennessee State Library & Archives had it. One of them quickly replied that it was not one source and that it was probably another which was available at TSLA. To look at that source is now on my "to do" list for my October visit to TSLA.

Since I'm trying to identify the parents of Dicey Davis who married Charles Harris in Wayne County in 1811, I thought it might be helpful if I looked at some online family trees to see if any of them could shed some light on some of the marriages that I had collected. We all know how entertaining some of those trees can be, especially the undocumented ones. For example, I found the same marriage attributed to one husband who was said to have belonged to different sets of parents. I was attempting to locate a Marice Carter who married a Betsey Harris 10 Dec 1806 in Cumberland Co., Ky. I found a Morris Veale Carter, who married a Nancy Brown in 1813 in Nelson Co., Ky., whose parents were listed by one researcher as Edward Carter and Margaret Mason, but by most researchers (including ones with a greater degree of documentation) as Peter Carter and Amelia Veale. None of these trees identify an earlier marriage to a Betsey/Elizabeth Harris, but at least I have an annotation about it which might help in unpuzzling something in the future.

Then you have the cases of the underage marriages. Did an 18-year-old man marry a 10-11 year old girl as one tree seemed to indicate in the marriage of Robert Davis to Sally Smith in Lincoln County, Kentucky in 1796? The tree, which lacks documentation, states that Robert was born in 1778 and was the son of Robert Davis and Jane Jopling. It states that Sally was born in 1785/86 to Martin Smith and Hannah/Joannah Stephens. Do we have incorrect birth dates? Or is this a case of misidentifying the wife? Or did an 18 year old really marry and underage girl? Once again, I have an annotation with plenty of questions for further research attached to this one for further investigation.

I'm not a person who uses online family trees as a source for a final report. I'd much prefer to get as close to the original records as possible. These trees only provide clues for me. I want to see if I can build the families from the original records. I just need to know what other people are saying about the relationships and see if I come to the same conclusions from my own research. If there are disagreements between my conclusions and theirs, can I resolve the conflicts? This is a case where my annotated notes will prove more helpful than my genealogy software. I have not identified any of these families as my own, although they are in the same area as my families.
Posted by Lori Thornton at 11:00 AM No comments:

Another Book Has Arrived

As I was reading reviews at work the other day, I ran across a review of Middling Folk: Three Seas, Three Centuries, One Scots-Irish Family by Linda H. Matthews. (Chicago: Chicago Review Press, 2010). 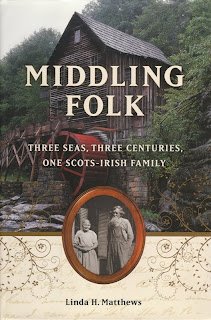 I'm excited about this book because it's published by a press known for good literary works. This is definitely a history of the Hammill Family who came from Scotland. It is divided into five parts:

I'm really looking forward to reading this book. The "blurb" on the dust jacket is a sentiment that many of us share about our own families that we have researched:

Matthews combines meticulous research and deft storytelling to show how the Scots-Irish Hammills--millers, wagon makers, and blacksmiths--lived out their lives against a backdrop of the American Revolution, the Civil War, and westward expansion. Readers will come away with a newfound respect for the ordinary families who helped shape this country and managed to hold their own through turbulent times.

I just love it when the UPS man comes to my house. He brings packages with such interesting things. Today's delivery was a book I'd ordered from Amazon. 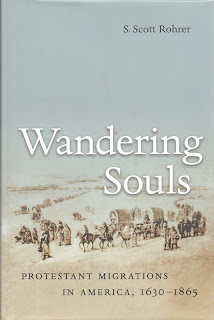 Update (9/7/2010): Bill and me are 10th cousins once removed. Bill & Polly are 11th cousins. Bill and Linda are 9th cousins twice removed. Other Perkins cousins found are Melinde Lutz Sanborn, Natalie Cottrill, and Randy Seaver. We don't have enough info at the moment to calculate the degree of relationship to the last three. Natalie and Bill do share a descent through John & Judith's daughter Mary.