Veterans Day is one of the holidays I remember from childhood. I was always confused because most of my family members still referred to it as Armistice Day.

An armistice was signed November 11, 1918 which put a stop to action in World War I until the Treaty of Versailles was signed the following year. The first celebration of Armistice Day was held in 1919. Congress adopted a resolution in 1926 to make it annual, but it did not become a federal holiday until 1938. Its name was changed from Armistice Day to Veterans Day in 1954. (As I pointed out earlier, many in my family still referred to it as Armistice Day more than a decade later.)

In the early 1970s, they tried to observe it the 4th Sunday of October. I lived in Mississippi which continued to observe it on November 11. Many other states followed suit and soon Congress was forced to return the holiday to the day on which the Armistice was signed.

"Pappaw," my paternal grandfather, was a World War I veteran, fighting in France, where he earned a purple heart. 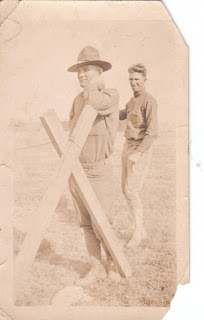 Posted by Lori Thornton at 9:00 AM