I left the Asheville airport this morning. What a strange experience. I got to the Northwest counter, and there was no one there to check the luggage. I was able to use the self-service kiosk to check myself in and told it I had one bag, but there was no tag for the bag that came out and no way for me to get it to the baggage carousel behind the counter. The lady from US Airways told me that she thought the guy had gone to clean the other plane. She got the tag that had printed and put on my luggage; however, I still couldn't get it to the carousel, and I sure wasn't going to just leave it so I had to stay and wait. He said he'd been getting the other plane off to Minneapolis. I also found no food in the airport. Someone told me there is a place there but that it's really hidden. I had planned to eat breakfast there. I thought it would be okay since I'd get a snack on the plane. Then I got a rude awakening that Northwest isn't nice like Delta is. Delta still gives you peanuts, cookies, or crackers. Northwest charges $5 for snacks. They are a little larger than the complimentary-sized ones, but they are not worth $5 so I had to wait until we got to Detroit. I hit the Chilis Too and had a burger. The flight from Detroit to Boston was one of the bumpiest I've had in a long time. We went through some storms. It was nice when we landed at Boston. I caught a taxi to the hotel and after making a few phone calls. 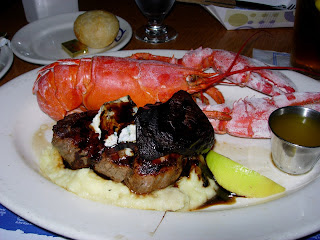 I went to the Pru Center to eat supper at Legal Seafood. Yes, I had the steak & lobster. I kept myself from going into the Best Buy that I spotted. There's a neat Mac store that has all those neat Thinbook Air computers nearby too. I went into Barnes & Noble and surprisingly didn't buy anything. I did see a few things that I would love to own though. There's a really cool book of maps of the coast that date back to the colonial period. It was selling for $60 so I decided to see if I could find it cheaper elsewhere before purchasing it. Besides I don't know how much room I'll have in my luggage for books like that! I went into the Truffles Fine Confections store across from Legal Seafood and got a grand marnier-flavored truffle to eat later tonight. I love orange and chocolate so that should be really tasty. The hotel didn't have a vending machine so I walked down to Deluca's Market (on the corner) and grabbed something to drink. I almost went to hear the Boston Pops tonight, but the only tickets left were the high-priced ones. I wanted to hear the Pops, but not that badly! It started pouring down rain right after 8 p.m. and they are predicting another big downpour between 10-11 tonight so I think I'm glad that I didn't splurge. I might try to catch them before I leave town though.

Updated June 1 to include the photos of the steak & lobster!

Posted by Lori Thornton at 9:10 PM

Email ThisBlogThis!Share to TwitterShare to FacebookShare to Pinterest
Labels: Boston