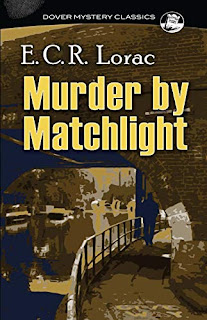 This reprint from the Golden Age of Mysteries features the death of a man known as John Ward on a bridge. Although witnesses catch a glimpse of the murder, his identity is unknown. A small pool of suspects, most of whom reside in the house with the man known as Ward, are interviewed by Inspector MacDonald and his colleagues. Evidence points to "John Ward" being an assumed name and another identity is found for the man which begins to yield motives in the group. While some of the characters could have been a bit more developed, others are sufficiently developed. Although it is not a particularly complicated mystery, it is enjoyable. Dover Publications is doing a great service providing better access to this and other mysteries of the Golden Age. This review is based on an Advance Readers Copy provided by the author through NetGalley with the expectation a review would be written.
Posted by Lori Thornton at 1:00 AM