While I was in New England last month, I was able to visit with the reference librarian at NEHGS who is a descendant from the Dearborn family which is one of my New England lines. Since this was one of the lines that I had chosen to work on while I was there, I asked him about the line we shared. I was able to give him some information on some of the more recent descent from Betsey Dearborn, daughter of Deacon Nathan Dearborn and he was able to provide me with some information on the immigrant Godfrey Dearborn’s father who had been previously unknown to me.

Today I began entering the information that I received from him in my database and noting as tasks the original records that I needed to make sure that I got that pertained to these. I printed off the information on each roll of microfilm which needs to be borrowed via a Local Family History Center. I also explored some of the information about the locations in which they lived.

First of all, let me state that many published genealogies say that Godfrey Dearborn was probably born in Exeter, Devon, England. Since he was baptized in Willoughby, Lincolnshire, that location seems unlikely. Godfrey’s father William was born in Lincolnshire. I don’t have a definite location for his birth at this point. David Dearborn says that William was married at St. Peter’s Church in Markby. One of the things that really caught my attention was a note by Dearborn that said that this was now the only thatched church in the county. I decided to do some investigation and located some photos online. In the article it states that the “parish was in the Alford sub-district of the Spilsby Registration District.” I found this interesting because while researching Willoughby, I had discovered that Anne Hutchinson was born in Alford. A well-documented history of the priory of Markby can be found at the British History Online site. There is also a brief history of the parish at the Alford Group of Churches web site which is as close to an “official” site for the church you can find.

I located all of the locations on an 1885 map of Northern Lincolnshire, an excerpt of which can be seen below with red stars showing locations of importance to the Dearebarne family. (The usual spelling of the surname in England is either Dearebarne or Dearbarne. The spelling Dearborn was adopted after coming to America.) 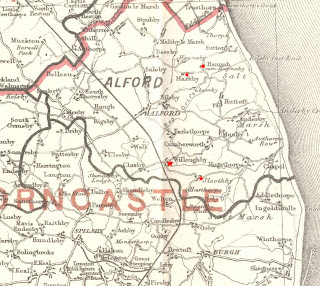 Willoughby is the location where Godfrey and all his brothers were baptized. Perhaps the most famous person to come from this village was Capt. John Smith. It’s interesting that Smith and Godfrey Dearborn ended up in such different locations in the Americas, having come from the same town; however, more than 30 years separated their trips. Willoughby lies just 3 miles south of Alford. Several of Godfrey’s children were baptized in Hannah, a town near Markby and Alford. (St. Andrew church in Hannah was built in 1753. He would have worshipped in an earlier building.)

Anne Hutchinson, of course, had been banished from the Massachusetts Bay Colony before the first evidence of Godfrey’s presence in the United States where we find that he signed the “Exeter Combination,” which was signed on the 4th of July 1639. (You’ll note on the scan of the document that it was the 5th month. Back then the calendar started with March.) (For more information on the town of Exeter, see Edward Chase’s history of Exeter.) We do know that Godfrey was a follower of Rev. John Wheelwright, brother-in-law of Anne Hutchinson, who founded the town of Exeter. Wheelwright was also for Alford. (Here is a nice summary of the antinomian controversy which was kindled by Anne’s teachings.) I find it interesting that Anne went to Rhode Island but that her brother-in-law ended up in New Hampshire. I plan to further research why they headed in opposite directions and how Wheelwright’s beliefs influenced the settlers in Southern New Hampshire. Wheelwright and many of his followers ended up settling Wells, Maine. Godfrey apparently received a land grant there but never settled there. What made him change his mind?

Godfrey moved to Hampton, New Hampshire about 10 years later. It is my understanding that his home which was located at 73 Exeter Road (Route 27) is still standing and may be the oldest frame house in the state. I’d love to have a recent photo of this home. There are old ones here. I probably saw the house on my trip to Hampton as I was on Route 27, but I did not know about this home at that time. (Of course, this gives me another excuse for another New England trip!)

Posted by Lori Thornton at 3:56 PM