Before I get started on the events of the day, let me just say that this is my 800th post! It's too bad it's not the 4th of July here in Boston. I'd be able to have all sorts of fireworks along the Charles River to celebrate that!

I purchased a Charlie Card at the Copley Square T station. I put more value on it than I needed for this trip because the lady at the station told me that you could use the Charlie Cards on the commuter rail. I found out that you couldn't when I got to the North Station. I immediately knew that I was going to have more riding that I'd possibly need on this trip so I'm going to have to come up with a bunch of extra trips to make up for it!

I took the green line from Copley Square to the North Station where I grabbed some coffee at Dunkin Donuts while waiting on the commuter rail (purple line) to arrive which would take me to Ipswich, the home of some of my ancestors.

I did an awful lot of walking around town. They didn't seem to have any type of local public transportation or tours. In order to go to some of the places I wanted to see, I'm going to have to rent a car or bike. Considering how out of shape I am, I think a bike would be a better option. I did see a lot of the town though. 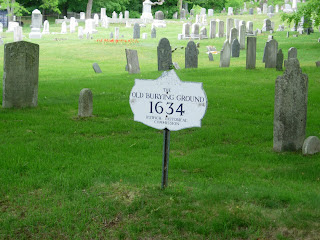 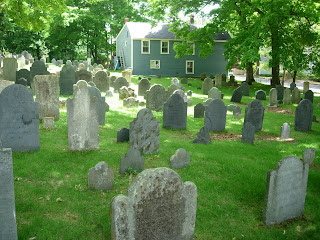 Many of the town's early settlers are buried in the Old Burying Ground. The cemetery dates back to 1634, and I had ancestors there as early as 1632. You may be able to tell that the stones are in varying stages of readability. It's amazing how well-preserved some of the stones actually are. I did not spot any of my ancestors' graves; however, my feet were dying and I just couldn't walk much by the point I made it to the cemetery. I was also a little afraid to depart from the path in that particular cemetery without checking with the historical society to make sure it was okay. I did see the graves of many names that I recognized from reading about the area though. 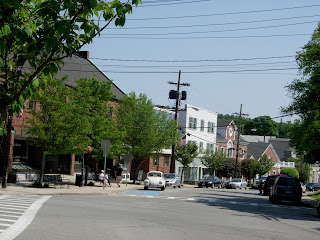 This is a view as I'm walking from the T stop into the heart of Ipswich. Sorry about the power lines, but I'm too lazy to edit them out! 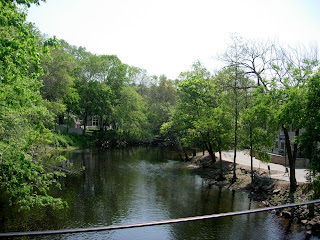 This is a view over the side of the Choate Bridge. The bridge, which dates to 1764 is the oldest stone arch bridge in continuous use according to the tourist literature. 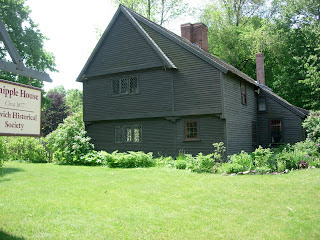 Whipple House dates to 1677. I have distant aunts and uncles who married some of the Whipples, but I don't know if they lived in this house or not. I just haven't researched the Whipple connections. 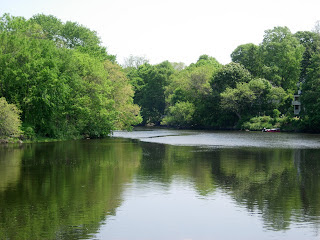 A very nice lady who lives in the Whipple house told me that I should walk up County Street to Green Street even though it wasn't part of the "walking tour." This is one of the gorgeous views on that street. There were also many historic homes on the street, and I really loved these views of the Ipswich River along it. 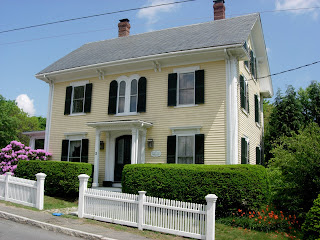 This is the Perkins house. This house dates to the 1860s and is, therefore, a little late to have belonged to one of my direct line ancestors. The builder was probably a distant cousin thoug 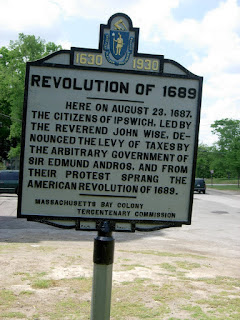 I found this sign very interesting simply because I had an ancestor who was imprisoned by Governor Andros and sent to the Tower of London for a time. I appreciated the memorial to this earlier "American Revolution." 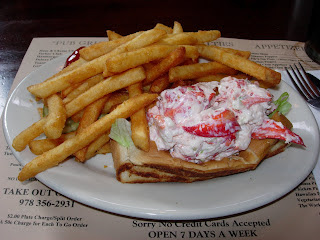 Lunch was at the Choate Bridge Pub. I had seen a recommendation on Lara's blog for this place. I decided that I needed to try the lobster roll since I'd never had one. It was very tasty, and it's a lot easier to eat lobster when someone else has already cracked it and gotten the meat out for you! 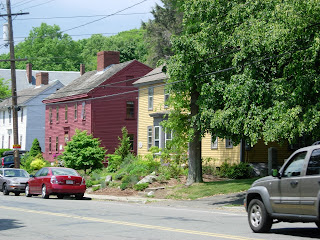 These are some of the historic homes on High Street. I believe that the white home is dated 1658; the red home is 1666; the yellow home is 1769. (I looked at my single pictures of them for the dates.)

I had really planned to stay in Ipswich until the 6:00 train; however, my feet were worn out before the 3:00 one so I went to the T station and waited . . . and waited . . . and waited. It arrived about 40 minutes late. (Actually the outbound train arrived about 45 minutes late at the time ours was supposed to depart so we knew it would be late.) Apparently there had been a fire right along the tracks between Chelsea and Lynn that held them up. The good news is that our fare for the return trip was free because it was so late.

I went back to the hotel and rested my feet a bit. I looked at some reviews on Yelp.com and discovered that the tapas place across from my hotel had excellent reviews so I had the evening meal at Tapéo. I had Pechuga Rellena (chicken with asparagus and goat cheese), chicken empanadas, and for dessert a very tasty flan! I didn't take pictures so I won't torture you with those!

I plan to read and relax this evening because I have another special adventure for tomorrow since the NEHGS library isn't open on Mondays!

Posted by Lori Thornton at 7:51 PM

My mouth is watering! What a lobster roll! Have Fun! :)

Hey, Lori, my mom's maiden name is Whipple, and that's an interesting family, let me tell you! If you need any help with your Whipple connections, I have a bunch!
Grace Veach

Wow, Grace, if we look hard enough, we may discover we're cousins! I'd love to be cousins with a Jeopardy champion!