Review: The War of 1812 by Donald Hickey 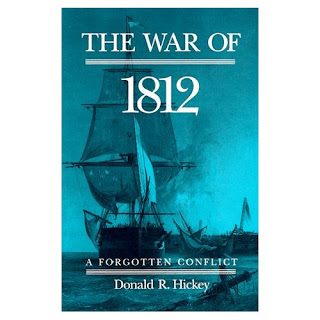 This book was read as part of the Military History Book Challenge hosted by Strategist's Personal Library. There aren't a lot of us participating, but hopefully the ones of us that signed up will reach our goal of 3 by November 11.

This book presented me with far more information about the War of 1812 than I'd previously known, but in spite of its depth, I felt there was more that could have been told regarding actual battles. The author does a fairly good job portraying the division between the Federalists and Republicans over the war. He does a pretty good job telling of outcomes of the war, but the part that seems to be lacking is the involvement of regular people in the conflict and how it influenced them. For example, I have an ancestor who lived in southwestern Ohio who is said to have died in 1814 in Detroit during the War. (Incidentally he'd had a son born earlier in that year.) I'd hoped to gain more information about the skirmish or battle in which he lost his life. Instead I was presented with statistical counts of injury and loss of life in various skirmishes, but not necessarily that one. The topical arrangement of the book tended to make it difficult to put together a timeline of what was happening at the same time on the different fronts or political scene. A timeline or chronology would have been helpful. In spite of its weaknesses, the author does a good job of enlightening his readers about this last (and hopefully final) conflict with Great Britain.
Posted by Lori Thornton at 8:43 PM

Email ThisBlogThis!Share to TwitterShare to FacebookShare to Pinterest
Labels: books, War of 1812

So it is mostly talking about the US side of things?

The majority is presented from the U.S. side but it isn't exclusively from that side.