I'm a cat person. I've had a few dogs over the years, but my true passion has always been for the feline companion.

My first cat was E.R.M. I was quite small and my older brothers were teaching me to spell at the time I named him. The story goes that I was asked by my paternal grandfather how to spell cat, and I proudly declared "E.R.M." E.R.M. had a favorite place to sit -- on a little shelf that was on the bar between the kitchen and dining room. Apparently one of the neighborhood boys tried to scare me that my cat had gotten out of the house, and I told him "No, he's not. He's inside on the shelf." Apparently I was correct in that instance.

Cats didn't fare too well in my neighborhood while I was growing up because of a mean chihuahua that lived across the street (and probably a few other neighborhood dogs too). That's probably why I have an indoor cat now!

The next cat that I really remember was a little black kitten that I got when my brother Gary was stationed in Wichita, Kansas with the air force. Their cat had kittens, and I brought one home with me which I named "Wichita." I loved that kitten, but he didn't survive in our neighborhood long.

I remember a yellow tabby with whom my nephew Derek had fun playing under the Christmas tree when he was small. I believe that is that cat that one of the neighbors witnessed being killed by "Tramp Baker" (the mean chihuahua).

After that I mostly had dogs. Floppy lived a long life and died on the same day that Elvis died. I was much sadder over Floppy's death than Elvis'. Floppy had "floppy ears." That's how he got his name. There was a dog named Cindy that I believe was Floppy's mother that I owned for awhile. We took care of my nephew's dogs Honey and Priscilla for awhile when they moved into a rental house and couldn't have dogs. I vaguely remember a dog named Sam from my preschool years.

Today, I'm Brumley's pet human. Here is Brumley enjoying a camping trip. He was very sad when his "Granny" and "PawPaw" got rid of the motor home. He loved to sit and sniff out the screen door! Brumley does not want any brothers or sisters. He's made that very clear. 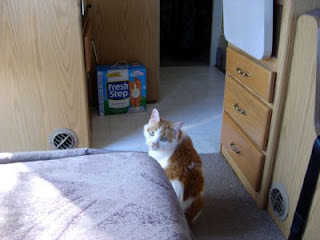 so did you ever find out what happened to the mean chihuahua? Maybe a larger cat got it! Thanks for sharing your story!